In 1912, the Curtis family, who were written about in the 1904 Biddeford Weekly Journal article, “Curtis Point Property Has Interesting History,” sold Curtis Point, later called Timber Point, to Charles and Lucie Wicks. In 1928, at the age of eighty-one, Arthur Curtis wrote an account of the history of Timber Point and gave the written document as a gift to the Wicks.

According to Ewing family oral history, the Wicks’ intent was to develop house lots on Curtis Point. Instead, in 1929, with the Depression looming large, the Wicks sold Curtis Point to Louise Parsons Ewing (1880-1951), and her husband, Charles Ewing (1872-1954).

“The life they (the Ewings) led at Timber Point was oriented around their children, outdoor activities, their own work and interests as well as the reception of their many literary and artistic friends including printmaker, illustrator and artist, Rockwell Kent, and authors: Kenneth Roberts (Letter from K. Roberts to C. Ewing), Booth Tarkington, and Margaret Deland (Letter from M. Deland to L. Ewing).

Note to the Ewings from Booth Tarkington.

Charles Ewing and Louise Parsons Ewing were part of the social networks of Boston, New York, and Maine (Social Register of New York). Their social circles contributed a great deal to the local communities.” (From the draft nomination to the National Registry of Historic Places.)

Shortly after purchasing Timber Point, Charles Ewing, a master architect, began design and construction of a seasonal estate.  In describing the brilliance of the design of the Main House at Timber Point, architectural historian Richard Chafee wrote in a personal correspondence to Suzie (Ewing) Nacar, “I can think of no other building where outside comes in like this. I believe Ewing designed the house from the inside out, and he knew the site like the back of his hand…And the house seems to intensify the site, the place where it is.”

The historic Ewing estate at Timber Point, situated amongst quaint coves with Timber Island off in the distance, embodies a unique sense of place.  The Maine Historic Preservation Commission (MHPC) recognized the architectural and historical significance of the Timber Point estate.  In 2011, MHPC determined the property was eligible for listing on the National Register of Historic Places as an “historic district” representative of a uniquely preserved, early twentieth-century New England coastal estate. The nomination is currently being completed by ttl architects of Portland, Maine. 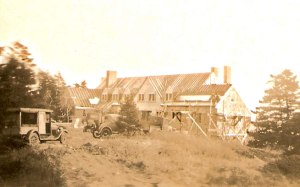 The Ewing family lived lightly on the land for eighty-two years, and they maintained the conservation ethic of their forbearers by choosing to sell Timber Point, and most of the accompanying acreage, to Rachel Carson National Wildlife Refuge (RCNWR) in 2011.

Working in collaboration with RCNWR to promote advanced learning in environmental stewardship and community sustainability, Timber Point Center will seek to develop beneficial partnerships with organizations that align with its mission.

Timber Point Center, by the restoration and adaptive reuse of the buildings as an overnight convening facility, aligns with the conservation and preservation efforts initiated by Ewing family ancestors, and begins the next chapter in this important historic legacy for our community. 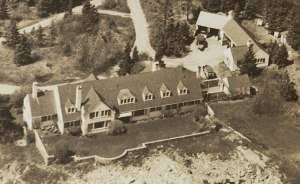